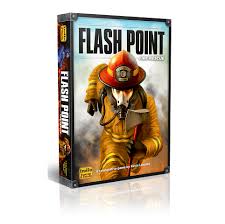 Flash Point is a co-operative game in which you are all fire-fighters trying to find and save victims before the building they are trapped in comes down around you.  Each turn you will have a number of action points to use to move around the building, extinguish fire and smoke, open doors, chop walls, and move victims.  Then the fire spreads.  If you don’t keep it under control, explosions can happen and make the structure less stable.  If too much damage occurs, the building collapses and your team has failed.  You will also fail if a predetermined number of victims succumb to the fire.  You win when the correct number of victims have been rescued by extricating them from the building.

What Lee likes about Flash Point:

I love co-ops!  Especially co-ops that punish you for your mistakes.  Do you break down the wall to make it easier to rescue the helpless survivor but comprise the structure of the building??

What Nicole likes about Flash Point:

The game has great replay-ability and scales in difficulty.  There is a nice level of tension is the randomness of how the fire spreads.  The expert level of the game adds in roles for the players and combustible materials.  I really enjoy both variations of the game.  I also like how you can bank some of your actions points for later use to try and have a bigger advantage later in the game.

Recommends based on Flash Point: 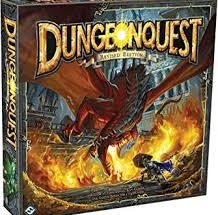